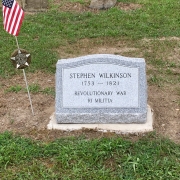 A search of the burial records from the Pearl Creek Cemetery revealed the internment of Stephen Wilkinson, a veteran of the American Revolution. Stephen was one of Covington’s earliest settlers.

Stephen was born January 29, 1755 in Providence, Rhode Island. His parents were Jeremiah and Elizabeth Amy Wilkinson and he was the brother of Jemima Wilkinson of the Universal Friend from Penn Yan, New York.

Stephen fought in the Battle of Rhode Island. He was a private in the Independent Company of Smithfield and Cumberland Rangers under Captain George Peck and Colonel Fry in 1777.

Stephen, along with his wife Lucy, settled in Covington around 1807 and purchased a large tract of land from the Holland Land Company. Following the War of 1812, he sold 267 acres of land to Benedict Brooks and Thomas Fisher.

Stephen died August 1, 1821 and was buried in the Pearl Creek Cemetery. Unfortunately his tombstone is now just a pile of rubble due to years of weathering.

The inscription on Stephen’s tombstone was:

“Softly his fainting head he lay

Upon his makers breast

His maker took his soul away,

And laid his flesh to rest

In God’s own arms he left his breadth,

That God’s own spirit gave,

His was the noblest road to death,

And his the sweetest grave

Stephen’s grave marker will soon get a new life as the result of the efforts of the Daughters of the American Revolution (DAR). At present the DAR is waiting for the Veteran’s Administrations approval so that application for a DAR recognition marker may be applied. Until then, an American flag is placed annually at his burial site right next to his wife Lucy’s tombstone, along with other Covington veterans,