A Brief History of Covington

Covington and the Underground Railroad

As 2019 Black History month winds down, we would be remiss if we didn’t discuss the role that Wyoming County and Covington played in the abolitionist movement and the Underground Railroad.

With this increase in support of abolition within the county, participation in the Underground Railroad grew to record numbers making Wyoming County the second largest with conductors or stationmasters in the state and Monroe County being the first.

With the passing of the Fugitive Slave Act in 1850 it became illegal to help or harbor escaping slaves. As a result of this, elements of the Underground Railroad were shrouded in secrecy, making it difficult to trace those involved in railroad activities.

Many of the fugitives that were escaping slavery would hide in boxes in wagons, trapdoors in floors, false walls and tunnels in homes and barns. The Underground Railroad directed the escaping slaves to follow waterways, where they could hide easily and the water would hide their scent from the hunting dogs.

Covington played a key role in the Underground Railroad and was the link between Wyoming and Genesee County known as the “Covington Connection”. The Covington Connection ran from Pennsylvania into New York State, through Friendship north to Covington and Pavilion Center and to the east side of Oatka Creek toward LeRoy to where conductor Donald McDonald lived.

A key station home on the Covington Connection was the home of Hugh Brooks at “Brooksholm” in Pearl Creek. Hugh Brooks was the son of Benedict Brooks who was the founder of the Middlebury Academy and served as a judge and a state legislator.

His son Hugh was a dedicated abolitionist and his home was a stop on the Underground Railroad. Other homes in the town were recruited to serve as stops on the railroad but as history has noted, many of these stops remained shrouded in mystery. Much of this was because of the danger associated legally with the harboring of fugitive slaves. Many of these buildings involved in the railroad are gone but evidence of involvement remains in documents detailing the role that Wyoming County played in helping fugitive slaves escape to freedom.

The First Congregational Church of Covington

(Taken from a manuscript by Mrs. Winifred Wellman McKeever)

The first church organized in Covington was the First Congregational Church of Covington. It was on October 25, 1817 that Reverend John Flavel Bliss, a missionary from Connecticut, came to Covington to start a church. The first congregation consisted of the following members from the community: Nathaniel and Hannah Brown, Benedict and Maria Brooks, Samuel and Hannah Pelton, Joyce Bradley, Mary Green, Elizabeth Miller, and Ann Brown. The first deacons elected were Nathaniel Brown and Benedict Brooks and the first children baptized were Phoebe Ann and Hugh Torbert Brooks.

Once the church was organized in 1817, the next fifteen years found services being held at various schoolhouses in the districts where members resided. Initially ministers from surrounding towns conducted services until a part-time minister was hired.

Initially the church was organized as “The First Congregational Church of Covington, but in 1820,an application was made for admission to the Presbytery. It wasn’t until June 13, 1828 that the church was designated as the “First Presbyterian Church of Covington”. This resulted in dissention between the two faiths ending in the church functioning part of the time as Congregational and the other time as Presbyterian until it finally resolved into two organizations.

During the time period of 1832 and 1833, the Congregational Society in Covington Center erected a church building. The Presbyterians, lacking their own church, joined with the Congregational Church on April 25, 1834 and asked that Presbytery to united them under the name of “The Church of Covington”, with the privilege of conducting their affairs according to congregational principles. The two faiths continued together until January 1840 when twenty-four members, at their own request, were dismissed for the purpose of forming a Presbyterian church at Pavilion. Once separated, neither was strong enough to last long. The last Congregational record is dated 1844,

In Covington records, under the date of February 24, 1857 it was noted: “Resolved that the town meetings and elections be held at the Center of Covington in the meeting house.” Upon this date, John C. Paine, Duncan Cameron, and Henry Watkins were appointed to take the necessary steps to obtain a legal title to the meetinghouse for the use of the Town. In 1860, the town records designate it as the “Town House” and it was used as such until it burned in the mid 1900’s.

Veterans’ Day is that time of the year that we, as a nation, celebrate and acknowledge the sacrifices that the members of our Armed Forces have made to maintain our freedoms. President Woodrow Wilson first celebrated the practice of commemorating Veterans’ Day on November 11, 1919 as Armistice Day through a proclamation.

One hundred years ago, in 1917, the United States entered the war in Europe to assist the Allies in defeating the Central powers (Germany and Austria-Hungry). All across the United States, young men answered the call to aid in this fight. The Town of Covington was represented by the enlistment of thirteen brave young men. Of these thirteen brave men, two made the ultimate sacrifice: Rollo McDonald Noble and Herbert Jeffers Clark.

Rollo and Herbert were both members of the Covington farming community and were the only sons for each family. Rollo was the 21-year-old son of Walter and Margaret Noble. He enlisted into the United States Naval Reserve Force as a Seaman, 2nd Class and served on the USS Alabama out of Yorktown, Virginia. Unfortunately, he passed away from broncho pneumonia on October 16, 1918 – less than one month before the armistice. Rollo was buried in the Pleasant Valley Cemetery in Piffard, New York.

Herbert was the 24-year-old son of Lyman and Caroline Clark. He enlisted into the United States Army and was assigned as a private in the 307th Infantry that saw action in the European theatre. Herbert’s division saw action in the Battle of Champagne and the Battle of Lorraine. He was killed in action on September 11, 1918. His burial was in the Oise-Aisner American Cemetery in Fere-en-Tardenois, France.

Jarius Cruttenden initially settled the Town of Covington in 1806. His homestead was located at the “Big Spring” near Pearl Creek. Other settlers, primarily from the New England area began to move into the area. Initially the early settlers built and lived in log homes, but frame houses quickly followed due to the presence of Sprague’s Saw Mill in what is now Pavilion.

In 1810 or 1811, Captain Levi Beardsley settled 600 acres of land at “Paine’s Corners”. The first wedding in the Town was held at Captain Beardsley’s home in 1814. Thatcher Beardsley became the first schoolteacher in 1815 in a school just south of the Beardsley homestead.

Present day Covington is primarily a residential and agricultural community comprised of 16,224.78 acres with Oat-ka Creek flowing through the Wyoming Valley of the Town. 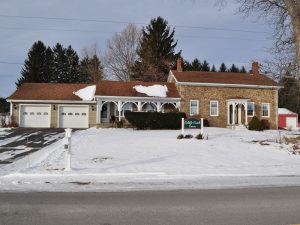